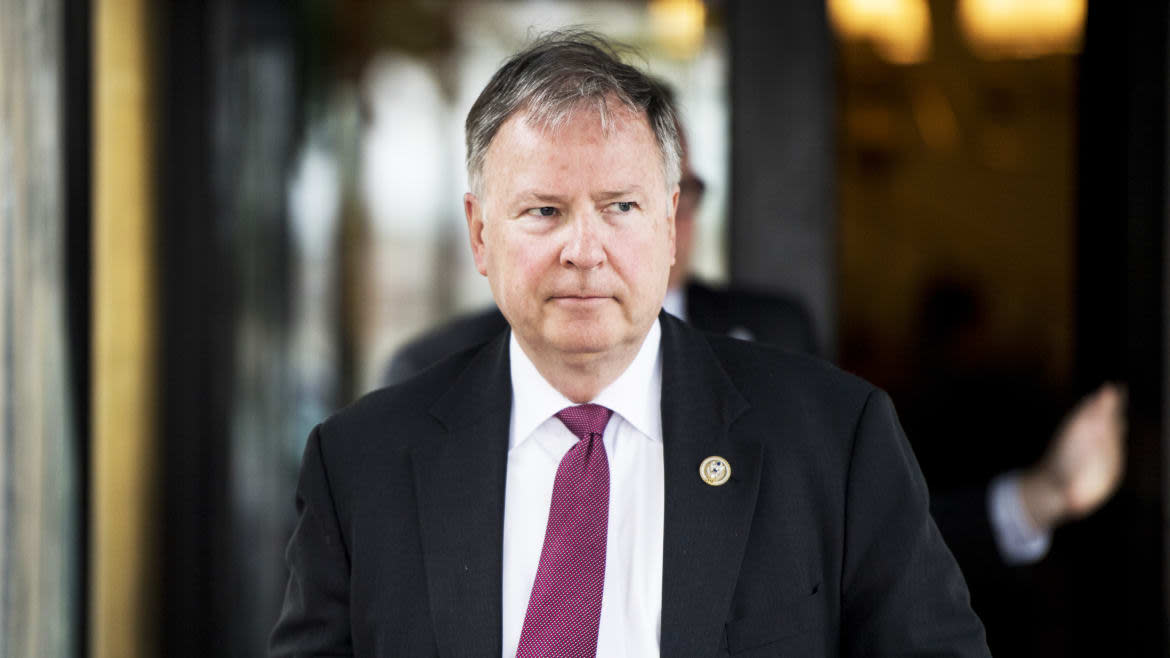 If you’ve been looking for reasons why members of Congress trading stocks can be a bad look, Rep. Doug Lamborn’s nosy and aggressive trading style is a case study in questionable behavior.

The Colorado congressman, who is being investigated for abuse of power, has for years exclusively bought and sold stock in a single company, a company that benefits from government contracts. And while his strategy is perfectly legal, it is a risky strategy for him, his re-election, and for Americans depending on the decisions of the legislator.

A review by The Daily Beast of Lamborn’s financial disclosures revealed that, for nearly a decade, he and his wife invested and traded in a single company: California-based cloud services company NetApp, Inc.

A congressman’s craving for beer isn’t even the weirdest part of this ethics report.

Filings show it is the only company represented in their individual retirement accounts, and the two buy and sell its stock frequently and aggressively, making a total of 75 trades over the past 12 months, more than one every five days.

Sales happen in flurries and bursts, with the two IRAs and Jean Lamborn’s Ameritrade margin account typically acquiring or selling shares for similar amounts on the same day.

Lamborn’s office dismissed the idea that such an undiversified investment strategy exposes his savings to undue risk, saying the bulk of his retirement funds are held in a federal savings plan. The statement did not address the business of his wife, who appears to have no other source of income apart from her job as a campaign accountant, which earned her business $40,629 last year.

“Congressman Lamborn has faithfully followed all public financial disclosure requirements during his 15 years in Congress,” spokeswoman Cassandra Sebastian said. “As an elected official, Congressman Lamborn understands his position is one of public trust, which is a duty he takes very seriously.”

The power couple’s financial intrigues stunned Professor Benjamin Edwards, a securities law expert and director of the Public Policy Clinic at the University of Nevada in Las Vegas.

“It’s very common to sue stockbrokers if they excessively concentrate a person’s assets in one company,” Edwards told The Daily Beast. “Normally it’s a very bad decision to load all your money into one company, because it puts you at huge risk.”

“He may know something, or have reason to believe he knows something, which makes the risk seem different to him,” Edwards speculated.

The Lamborns’ trades generally seem to follow rather than anticipate market trends, although it’s impossible to see how the stock was doing at the exact time they bought or sold it. Nonetheless, Edwards warned that the singular focus of the Lamborns’ investments could affect the congressman’s ability to perform his public duties.

“When you have a member of Congress with a concentrated investment in a particular company, it can cause them to think about the impact of their votes and actions on their stock market positions,” Edwards said. “And the more concentrated its assets, the more that risk appears.

Lamborn did not say he owned any NetApp stock when he first entered Congress in 2007, though he admitted in a 2011 letter to the ethics committee that he had omitted for years of disclose the contents of his and his wife’s IRAs, both of whom he disclosed hold NetApp stock. . It wasn’t until 2013 that the two began concentrating all of their private savings in the business.

Lamborn has served on the House Armed Services Committee since 2008, and since then NetApp has received more than 30 Department of Defense contracts, some running into the six figures. The company’s share price has more than doubled over the past five years.

Nevertheless, Lamborn insisted that this did not represent any conflict of interest.

“He has never invested in individual energy or defense companies, even though that would be allowed under current law,” said Sebastian, his spokesman. “NetApp Inc. is not a defense company, and it never has been to its knowledge.”

In a statement to The Daily Beast, NetApp denied any history or relationship with Lamborn or his wife.

“We are not aware of any contact between anyone acting on NetApp’s behalf and Rep. Lamborn or his wife,” a company spokeswoman said. “Our company policy prohibits the sharing of NetApp confidential information outside of the company.”

The controversy surrounding the Lamborns is not, at this point, about their stock trading. Instead, a report by the Congressional Ethics Office last month published detailed allegations that they coerced government personnel into offering gifts and favors to them and their children. The case has since been referred to the House Ethics Committee.

Learn more about The Daily Beast.

Get the Daily Beast’s biggest scoops and scandals straight to your inbox. Register now.