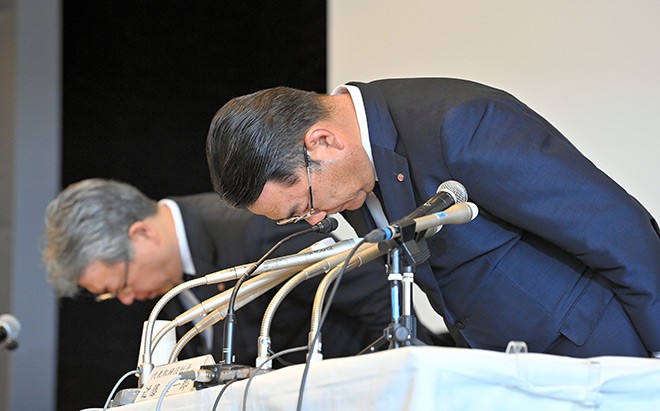 All four arrested on March 4 worked in the company equity department.

According to sources, all four insisted during voluntary questioning before their arrest that there was nothing illegal about the transactions in which they were involved.

President Yuichiro Kondo held a press conference on March 5 where he apologized for the incident.

“We think deeply and seriously accept that we caused a situation that could shake confidence in the market,” Kondo said.

He said nothing about resigning to show his responsibility.

In a statement released on March 5, the company said a commission of inquiry made up of three lawyers had been appointed to look into the allegations.

“We take this matter very seriously and sincerely apologize to our customers and other affected parties for causing great concern and inconvenience,” the statement added.

Prosecutors allege the four conspired to prop up the share price of five stocks, including those listed on the First Section of the Tokyo Stock Exchange, between December 2019 and November 2020.

The company was involved in block trades of these shares and the share price support was seen as an attempt to ensure that the block trades went through.

Block trades involve massive sales of shares by major shareholders. Since selling a large number of shares at the same time could lead to a sharp drop in the share price, the securities firms arrange to sell the shares in smaller lots to other investors outside of the market.

The share price for the transaction is determined by the closing price on the day the sale is to be made. But if the stock price drops, the shareholder who originally put the shares up for sale can request a postponement of the transaction to avoid a detrimental loss.

However, stopping a trade is a step that few securities firms are willing to take due to the risk of damaging the institution’s reputation and losing the gains from the trade.

Investigative sources alleged that the four were involved in placing a large volume buy order shortly before the exchanges closed to ensure the stability of the share price.

Normally, those who work in the equity department and trade stocks using the company’s own funds do not share information with those who process bulk trades to avoid the occurrence of irregularities, according to multiple sources. of the securities industry.

But the investigative sources said Okazaki, who was responsible for handling block trades at SMBC Nikko, contacted Yamada when he was concerned about a possible decline in the share price of a traded stock. in this way. Yamada would in turn use the company’s funds to place the buy order to ensure the stock price does not fall precipitously, sources said.

In Tech’s Bust, Not All Equity Funds Fall Equally — Or At All