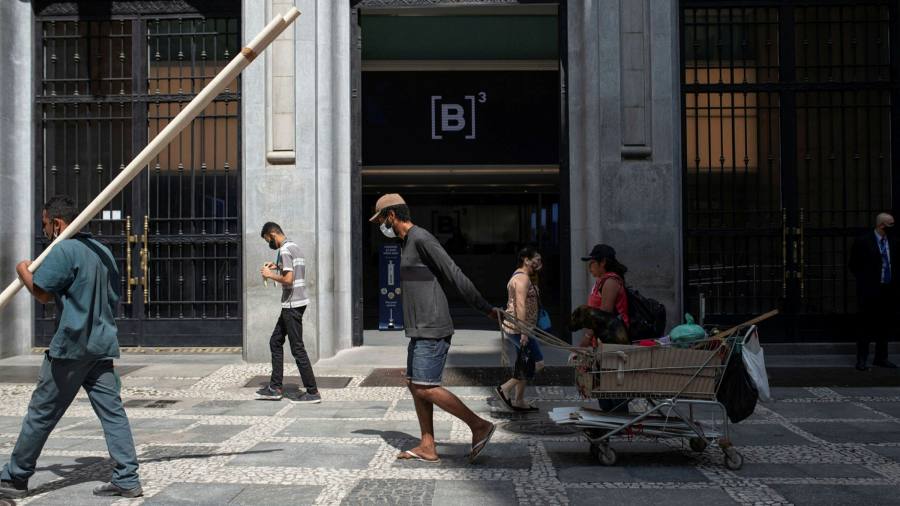 Latin America has become a rare haven after global equities have fallen this year, with stock markets in the region benefiting from soaring commodity prices and traders looking for bargains.

The region has “a lot of wind in its sails” after what has been “a difficult number of years,” said Ed Kuczma, portfolio manager for BlackRock’s Latin American equity funds. “It was a period of several years of underperformance and [now] it will probably be more than a year of outperformance,” he added.

Latin American markets started 2022 on a strong note thanks to a combination of cheap valuations, a relatively calm political environment and rising commodity prices. The MSCI Latin America Index is valued at 8.6 times expected earnings over the next year, about half the valuation of the All-World Index, according to Bloomberg data.

Equity gains for overseas investors were also flattered by the rise in Latin American currencies, which contributed about half of this year’s returns.

Foreign investors have driven the gains, pouring 75 billion reais ($15 billion) so far this year into Brazil’s B3 stock exchange alone, Bank of America analysts say, even as local investors dumped shares in favor of fixed income securities. By comparison, funds holding European stocks, seen as highly exposed to the Ukraine crisis, saw outflows of $13.5 billion in the week to March 9 – the biggest redemptions ever, according to EPFR data.

“Investors are scrambling to find places that will benefit from rising commodity prices and be shielded from geopolitical risks,” said Gustavo Medeiros, head of research at commodity-focused asset manager Ashmore. Emerging Markets.

“Obviously there are risks that will be important to monitor, but from a valuation perspective, Latin American assets still have a lot of headroom.”

The crisis in Europe has led to exceptional rebounds in a multitude of commodities, from oil to metals and wheat. All constituents of the Latin American index are commodity exporters and Brazil, which accounts for almost two-thirds of its weighting, is particularly well placed to benefit from this.

In addition to the economic fallout from the war, Latin America also stands to gain from changes in the structure of the world market. Itaú Unibanco analysts estimate the move to kick Russia out of the MSCI Emerging Markets Index could lead to up to $2.1 billion in additional inflows as investors tracking the index redeploy funds to other markets.

Rising food prices increase the risks of a new spiral in inflation rates, and political uncertainty is expected to increase with the upcoming presidential elections in Colombia and Brazil. Yet so far investors have not seemed fazed by the prospect of a return of left-leaning former Brazilian president Luiz Inácio Lula da Silva, who is ahead of incumbent Jair Bolsonaro in opinion polls.

Frederico Sampaio, Franklin Templeton Brazil’s chief investment officer for equities, said “the good news at least is that the two main candidates are both known” as they have governed before.

“A surprise would look like an upside risk: a Third Way candidate seems unlikely at this time but is not impossible. . .[and]would be welcomed by the market.

The Moscow Stock Exchange will remain frozen for the third week