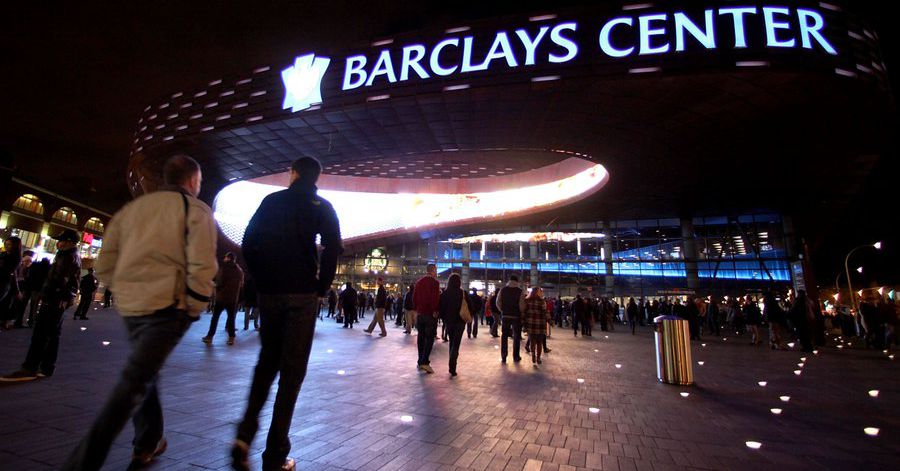 The Nets and their parent company, BSE Global, celebrate the 10th anniversary of the Barclays Center this month. It was on September 28, 2012 that the arena opened with eight nights of Jay-Z which included the introduction of the black and white Nets jersey that the Brooklyn rapper had helped design.

But six years earlier, the odds of a new arena rising in Flatbush and Atlantic were far from a sure thing. Bruce Ratner envisioned the then-unnamed arena as the centerpiece of a 16-building, $6.4 billion complex rising partly above the Atlantic Yards, the third-highest transit station busiest in the city and the busiest outside of Manhattan.

But money was starting to get tight, and the project was the subject of community activism that saw the whole project as too big, too cumbersome. Ratner and his new CEO, Brett Yormark, needed to find revenue streams that could ultimately be used to entice investors to buy construction bonds. A deal on arena naming rights would be a good start.

So, as Sports Business Journal recounts this week, Yormark made a series of “cold calls” – unsolicited inquiries from prospects – to find a sponsor for the building which would then be designed by the “starchitect”. Frank Gehry. It wasn’t easy as writer David Bourne wrote based on a 2016 book by author David J. Halberstam:

“Brett Yormark had developed an interesting way of cold calling, something only he as CEO could pull off,” Halberstam wrote. “Yormark deputized for her administrative assistant, Jeanette Neary, to call a host of senior CEOs and introduce herself to their administrative assistants. When she reached those assistants, she requested meetings of their respective bosses about the Nets’ move to Brooklyn.

The process targeting blue chip brands led to a meeting between Yormark and Gerard LaRocca, then chief administrative officer of Barclays Bank in the United States. LaRocca assumed the reunion had something to do with a suite or hospitality package, Halberstam wrote, but he received much more than a PowerPoint presentation.

One thing led to another, Yormark and his revenue officer Neil Davis soon traveled to London to meet Bob Diamond, the American CEO of Barclays, who gave the green light to the idea, a 20-year deal with full payout. of $400 million. This was the first projected income Yormark could show potential investors in the arena. For Barclays, then planning retail banking operations in the United States, a new and architecturally innovative large arena in the city would provide visibility.

The deal, according to Bourne, took a number of twists and turns, and Bourne writes and Atlantic Yards critic and columnist Norm Oder sheds some light. Delays caused by community protests and a series of lawsuits and, more importantly, the financial crisis of 2007-08 resulted in a stasis that only ended when construction began on a lean arena in 2010. By then, Ratner had agreed to sell 80 percent of the team and 45 percent of the arena to Mikhail Prokhorov, then the owner of the wealthiest sports team in the world. The delays — and ultimately the loss of Gehry as the project’s overall architect — led to two renegotiations of the naming rights agreement, as Oder notes.

The decision to replace Gehry’s complicated design, as Neil Davis told Halberstam, “didn’t sit well with decision-makers”, meaning the deal had to “be extensively renegotiated”. Moreover, Davis noted, “Barclays itself was battling the Great Recession.” Barclays eventually abandoned its US retail banking plans and was accused of manipulating the global bank interest rate in a huge financial scandal. Diamond had to withdraw.

So, in the end, the deal ended up being $200 million for 20 years, a good price then, not so much now. In fact, the Nets’ new uniform sponsorship deal with WeBull, the online stockbroker, is worth $30 million a year, according to CNBC. This too started with a cold call. The WeBull deal has led to speculation that the Nets and Barclays will renegotiate again, this time before the contract expires in 2026.

The Nets and BSE Global would prefer to keep the name, as Joe Tsai tweeted 15 months ago. But Tsai also has some big revenue goals he’d like to hit, hopefully growing from $341 million in annual revenue last year to $500 million in three years and $1 billion in seven. year. Getting a market price for the naming rights, whether from Barclays or someone else, would be a big help in achieving this goal.

Personal Loan for Fair Credit: Should You Take One?